A Blog of politically "incorrect" opinion and commentary on culture, politics and spirituality by a woman who challenges the traditional feminist ideals with bold curiosity and refreshing insight.

I thought that the beer scene in Greater Portland (Maine) was big, but a recent trip to San Diego, California proved to be another excellent place to experience brews and ambiance galore 🙂

During a six day trip I had the chance to visit and/or taste six breweries in the San Diego region.  First up was Karl Strauss Brewing Company which has several locations, however, we (my fellow travelers and I) happened to be near the one in La Jolla.  After an early afternoon of coastal exploring, taco tasting and seal viewing we were ready for some beer!  Karl Strauss did not disappoint.  Red Trolley (5.8% ABV), an Irish red with a sweet finish, was my favorite followed by Pintail (5.35% ABV), an American Pale ale with bright citrus hop favors.  The stout, Wreck Alley (9%ABV – love this name!) was good to end with because of its rich coffee flavor so I should have had some desert with it!  The Hive Five IPA was one that I could tolerate as an IPA, but its floral and grassy tones were too earthy for my tastes (of course I finished it though, lol).

The evening ended with a sunset trip to Point Loma and then dinner (and beer) at Ballast Point Brewery which had more selections than I could count!  I did manage to pick 4 tasters,  Moscow Mule Ale (8%ABV) just like its name!!, Pineaple Sculpin IPA (7%ABV) nice, Wahoo White (4.5%ABV) a Belgian style winner :), and the California Kolsh (5.2%ABV) dude it’s light but complex…A very nice end to the evening with their delicious burgers too! 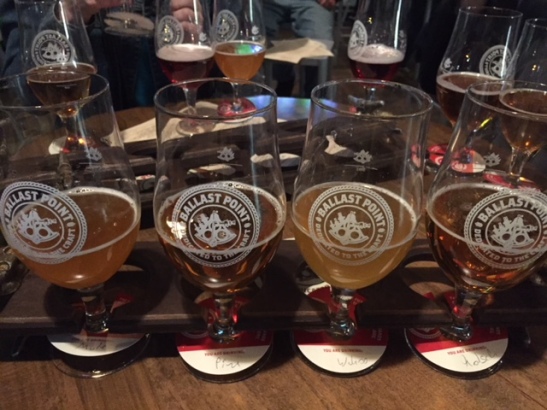 At The Zoo on another day I was pleasantly surprised to see that they had on hand some local brews at their cafe stops.  I had to try the Belching Beaver Peanut Butter Milk Stout (5.3%ABV) because my husband is a big fan of anything peanut butter.  Smooth and flavorful but not too peanut buttery, one was enough.

And then on another evening we found Coronado Brewery (located at Imperial Beach).  The brews were cold and the food was delicious.  The Orange Ave Wit (5.5%ABV) they say is Beligan by way of Coronado…I believe it! Mighty tasty I must say, and the Coronado Hotel was not far away… 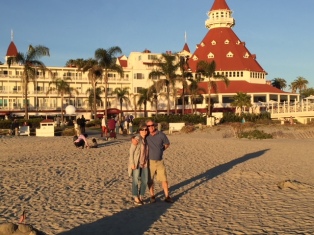 The last day in San Diego just happened to be my birthday, so I wished that I could try to visit as many breweries as we could fit into the day.  Stone Brewing Tap Room was right beside the Petco Park Stadium. I am not even going to try to show and tell all the tastings this day except to say that I had fun and did what I could 😉

Mission brewery was in the former Wonder Bread Bakery and so the beer was better than sliced bread (so they say!)

And we found the Belching Beaver in Ocean Beach…a fitting Bohemian atmosphere for the place.  I had just a bit more peanut butter beer, yum.

So yes, that is me behind the bar at a very old hotel in Old Town.  They say the area is full of ghosts and we tried hard to find them, but they didn’t want to be found.  Tacos and more beer set everything just right…BOO!

I think I’ll be going back to San Diego because there is so much more to experience. 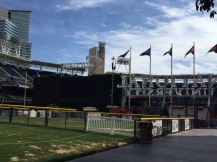 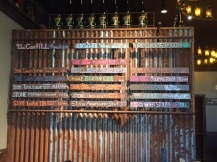 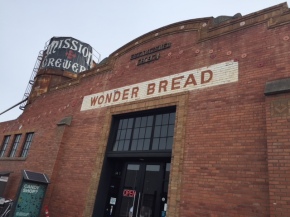